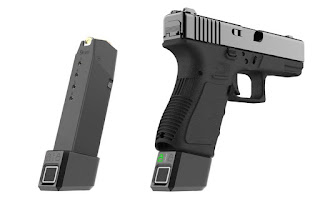 Innovator: Daniel BiranAge: 52Co-founder of two-year-old, 15-employee startup Clipfort in Kfar Saba, Israel
Form and functionClipfort’s sensor-equipped magazines have fingerprint identification to prevent an unauthorized user from pulling the trigger. The biometrics, built into the clip, are being designed for most guns, the company says.
Origin Biran, who previously made biometric memory sticks, began working on gun safety following the 2012 Sandy Hook massacre.
1. Lock The fingerprint sensor on the bottom of the clip is programmed at purchase to match the owner’s print. It works 99,999 times out of 100,000, the company says.
2. Load ID confirmation takes 0.7 seconds. Given a match, the clip can load bullets until the magazine is removed from the gun.
Prototypes Clipfort has developed magazines for the M16 rifle and a range of pistols.
Price The company says it plans to charge $150 to $200 for the clips, which can be refilled with new bullets.
Funding Clipfort says it has raised $2 million from investors and is looking for $4 million more by yearend.

Next StepsClipfort has joined with gun manufacturer Check-Mate Industries to begin mass production by the end of next year. Adam Winkler, a UCLA law professor and author of Gunfight: The Battle Over the Right to Bear Arms in America, says that even though Clipfort has strenuously avoided taking a position on U.S. gun laws, “many gun enthusiasts will see this as a back door to restricting their Second Amendment rights”—and pressure retailers to keep the magazines off their shelves.
Upplagd av Rowe kl. 12:01